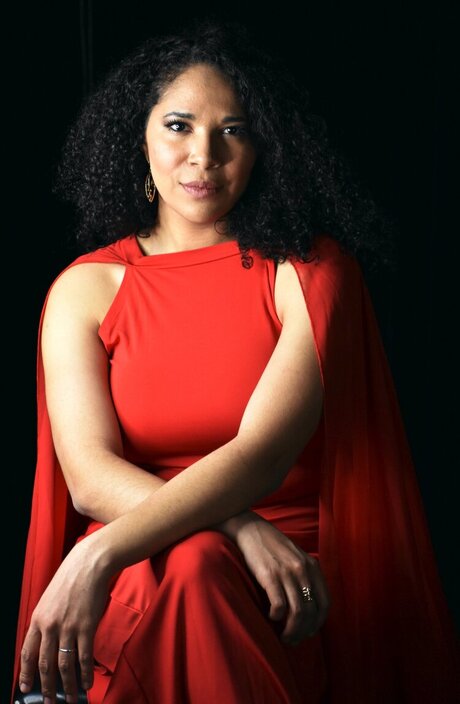 Amanda Lynn Bottoms begins the 2019/2020 season as a new member of the Domingo Cafritz Young Artist Program at the Washington National Opera. Her mainstage work will include roles in Francesca Zambello’s iconic PORGY & BESS, the Maurice Sendak production of DIE ZAUBERFLÖTE, Menotti’s THE CONSUL and the world premiere of ADMISSIONS in the Washington National Opera AOI program. This Fall she debuted with Opera Philadelphia as part of their O19 Festival, performing the role of Smeraldina in Prokofiev’s THE LOVE FOR THREE ORANGES. She returns to the Kimmel Center to join the Philadelphia Chamber Music Society Emerging Voices Recital Series in January 2020 singing works by de Falla, Granados, Boulanger, Bacri and Wallen. Debuting in the role of Jane/Celeste (Cover), Bottoms joins the Cincinnati Opera this summer in the world premiere of Smith and Spear’s CASTOR AND PATIENCE.
Ms. Bottoms competed in this years Operalia Competition hosted in Prague, was a finalist in the George London Competition, recipient of the 2019 London Encouragement Award and was a national finalist in the Zachary Society Vocal Competition. In addition, she was a Memphis District Finalist of the Metropolitan Opera National Councils and competed as a finalist in the Southeast Region Finals in Atlanta.
This summer featured her return to the Philadelphia Orchestra in CANDIDE with maestro Yannick Nézet-Séguin, Mahler SYMPHONY NO.2 with the UCLA Symphony and Mercedes in CARMEN with the Buffalo Philharmonic. Concert work for the 2018/2019 season featured dual performances with the UCLA Symphony debuting Richard Danielpour’s newest work THE PASSION OF YESHUA and Strauss’ VIER LETZTE LIEDER with the Curtis Symphony Orchestra. To much acclaim, she made her return to Carnegie Hall under the baton of Mark Shapiro for the world premiere of The Brothers Balliett’s FIFTY TRILLION MOLECULAR GENIUSES.
A recent graduate of the Curtis Institute of Music, her mainstage work in the 2017-2019 seasons, included debuts as Mrs. Lovett in Emma Griffins’ new production of SWEENEY TODD and covering Donna Elvira in R.B. Schlather’s reimagined DON GIOVANNI. Beyond Curtis, she joined the Juilliard Symphony at Carnegie Hall for their Bernstein Centennial concert and originated the role of Frances in the world premiere of THE FLOOD with Opera Columbus. Miss Bottoms made her solo recital debut with Washington Performing Arts as a part of their Music in the Country series alongside Milos Repicky, in addition to performances as Baba in THE MEDIUM and Olga in EUGENE ONEGIN, Curtis/Opera Philadelphia co-productions. A performance of de Falla's EL AMOR BRUJO with Lansing Symphony Orchestra was followed by her return to SUNY Fredonia for the Hillman Opera 60th Anniversary Gala performing selections from CARMEN and RIGOLETTO. In addition, she debuted with the Philadelphia Orchestra and traveled to Tokyo, Japan to perform the role of Anita in Bernstein's WEST SIDE STORY with the NHK Symphony Orchestra under the baton of maestro Paavo Järvi. In her return to the Chautauqua Institute, summer of 2018, Bottoms made her debut as CARMEN with the Festival Symphony Orchestra in the historic Chautauqua amphitheater.