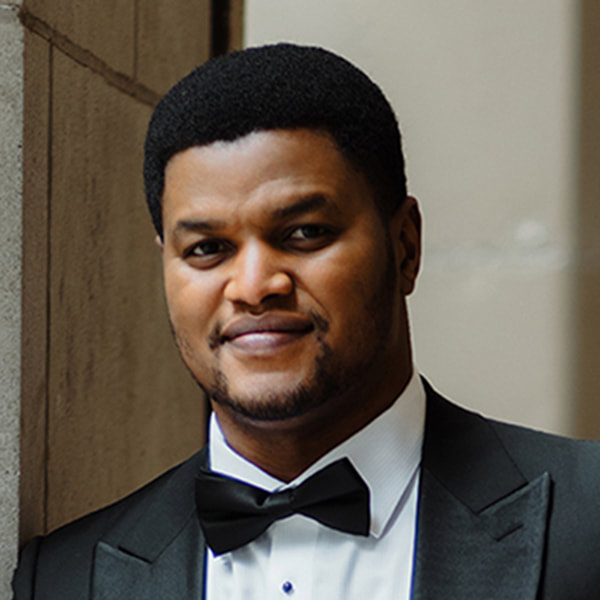 ​A third-year tenor with Lyric Opera’s Patrick G. and Shirley W. Ryan Opera Center, Lunga Eric Hallam is from Khayelitsha, South Africa. There, he founded a nonprofit organization called Phenomenal Opera Voices the same year he enrolled at the University of Cape Town College of Music, where he received his diploma and postgraduate (with honors) degrees in music training. Recent engagements as a Young Artist at Cape Town Opera include Tebaldo/I capuleti e i montecchi, Edgardo/Lucia di Lammermoor, and Roberto/Maria Stuarda, as well as Ramiro/La Cenerentola at Cape Town Conservatory. He was featured as part of the 2017 Harare International Festival of the Arts in Zimbabwe. Hallam competed as a semifinalist in the 2019 Neue Stimmen International Singing Competition and the 2019 Voice of South Africa International Singing Competition. Chicago appearances include the Harris Theater’s Beyond the Aria series alongside Joyce DiDonato. In Lyric’s 2021/22 season, he performed in Sunday in the Park with Lyric’s Rising Stars and as Adult Nathan/Fire Shut Up in My Bones. For Lyric’s 2022/23 season, Hallam appears in Le Comte Ory (Lyric premiere) and in Proximity, the triple bill of new American operas (world premiere).​