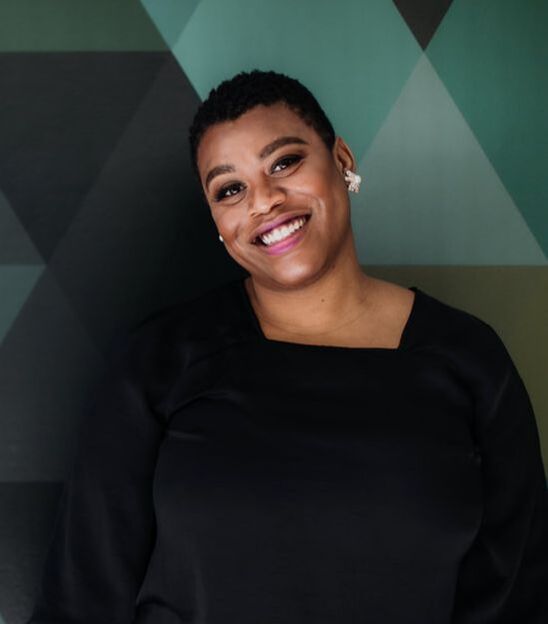 Rising star Whitney Morrison has earned praise for her “big, gleaming soprano” (Chicago Classical Review) and “vocally sumptuous” performances (Chicago Tribune). A Chicago native and recent alum of the Ryan Opera Center, Morrison champions an African American aesthetic in classical music, embracing a style of performance that blends classical singing technique with elements of the gospel singing tradition. Of her most recent performance in the Lyric Opera of Chicago’s virtual concert, “Lawrence Brownlee and Friends: The Next Chapter,” Opera News raved, “Whitney Morrison was simply astonishing in everything she sang…This is a voice we need to hear live.”

Morrison’s future engagements include 7 Deaths of Maria Callas with Marina Abramović at the Greek National Opera Athens. She appeared earlier this season as Leonie Baker in the world premiere of Freedom Ride at Chicago Opera Theater, prompting The Wall Street Journal to declare, “One impassioned aria caught my ear: Leonie Baker (soprano Whitney Morrison)” and Classical Voice America to say, “the production’s big surprise was soprano Whitney Morrison, who nearly stole the show.”

Morrison also garnered acclaim for her “richly textured performance and luxurious voice” (The Times Weekly) as Sister Rose in Dead Man Walking at the Lyric Opera of Chicago. While at the Ryan Opera Center, Morrison covered the roles of Liù (Turandot), Marguerite (Faust) and Mimì (La Bohème) and performed as Countess Ceprano (Rigoletto), Gerhilde (Die Walküre) the First Cretan Woman (Idomeneo) and the Confidante (Elektra).   Other recent credits include the role of Donna Anna (Don Giovanni) with Chicago’s Floating Opera Company and appearances at the 2018 Grant Park Music Festival and the Rochester Institute of Technology’s celebration of Martin Luther King Jr.’s legacy, “MLK Expressions.”

Morrison’s musical blessings arrived at an early age. Her parents would put her on the table and she would happily perform a favorite church song for anyone within earshot. In her youth, she reveled in the diverse music and charismatic culture of the black church where her grandfather pastored, and eagerly anticipated the annual performance of Handel’s Messiah at Progressive Baptist, the church attended by her aunts and grandparents. To this day, Morrison credits her love of classical music and her continued commitment to music ministry to her upbringing in the church.

As a teenager, Morrison attended Rich South High School in Richton Park, IL, where she studied classical voice, pedagogy and music theory under the school’s then Director of Choral Music, Lana Manson. Recognizing her talents, Manson offered free voice lessons after school, and upon graduation recommended Morrison continue her studies at Alabama’s Oakwood University to pursue her bachelor’s degree in Vocal Performance and Pedagogy. There, under the tutelage of Dr. Julie Moore Foster, she performed her first operatic roles as Miss Pinkerton in Menotti’s The Old Maid and the Thief and as the Countess in scenes from Mozart’s Le Nozze di Figaro. She was also a soloist and member of the elite traveling ensemble the Aeolians, with whom she toured much of the United States and abroad to Moscow, Russia. Her continued studies led her to a master’s degree in music from the Eastman School of Music.
​
A 2020 National Semifinalist in the Metropolitan Opera National Council Auditions, Morrison also counts among her many accolades first place in the National Classical Singer University Competition, top honors in the Musicians Club of Women Competition, selection as a finalist in the Luminarts Classical Music Competition and recipient of a She Shines Award from Girls Inc. of Chicago. In 2017, she was a recepient of the Richard F. Gold Career Grant by the Shoshana Foundation. Morrison is a two-time recipient of the UNCF John Lennon Endowed Scholarship and also trained at the Georg Solti Accademia di Bel Canto in Italy and the Neil Semer Vocal Institute in Germany.
​Photo: Jaclyn Simpson